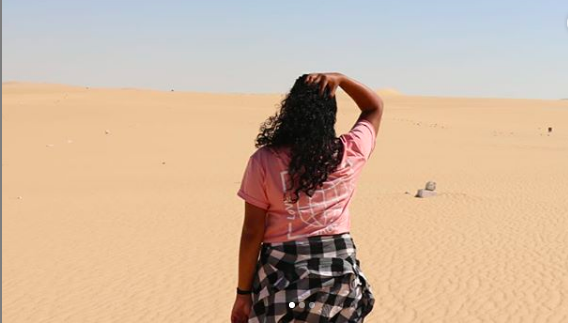 Priscilla Samuel, a junior at the University of Texas at Dallas, usually spends her Fourth of July barbecuing, setting off sparklers, and watching the fireworks together with her family. However, during the summer of 2018, she couldn’t do that. Instead, she was in Egypt on an AIESEC exchange experience, volunteering to work on a project to increase tourism in the country. Because she couldn’t go to any Fourth of July celebrations, being in a completely different country, her newly made friends from all around the world decided to bring it to her instead, knowing how important the holiday is to her, singing the American national anthem and “Party in the U.S.A” by Miley Cyrus, all for her. When asked about how she felt, Priscilla says she was so happy, stating, “It’s the nicest thing anyone has ever done for me.”

She experienced this, along with so much more, on this opportunity, growing, not only personally, but also professionally, in a way that will help her far into the future.

“It was a time when I got to develop myself as a person,” is what Priscilla says when asked for a quote about her exchange experience. She says she went into this opportunity not expecting much, just wanting to check off a global internship credit from her degree plan but ended up getting so much more out of it.

As soon as Priscilla landed in Cairo, a member from AIESEC was ready to pick her up, kindly answering any questions she had and taking her to exchange her money. Even so, she could already feel the culture difference in the way people around her acted and spoke. She was taken to the hostel she was staying at with three other girls from multiple Hispanic backgrounds.

She began her volunteer work, a project on increasing tourism in Egypt, in a team with four other people each from different countries, a girl from Mexico and three boys from Brazil, India, and Sri Lanka. Each had a different role assigned to them. Priscilla’s role was team leader, so she was put into a new situation where she had to learn how to put aside cultural differences while working with others.

“I had to learn how to communicate with the rest of the people on my team,” says Priscilla. She says they all had to work past their cultural differences, whether it was figuring out when was best to work together, how to schedule their work, or anything else. However, she says, because they were all so different in the way they think and do things, their ideas could mix well together, and the project became just that much cooler and more amazing.

Even off the clock, Priscilla spent a lot of time with the other AIESEC exchange participants there, her roommates, her teammates, and even with locals. With her roommates, she practiced Spanish. With locals, she learned a few key Arabic phrases. With her newly made friend group of people from all around the world, Priscilla was able to travel all around Egypt, visiting the sphinx, the pyramids, riding a camel, wandering the streets, and so much more.

When she was working, Priscilla says, she felt as though she developed her leadership skills a lot. She says she used to not listen to what others said as much and always liked for things to go her way during projects and work. However, during this experience, she was forced, in a way, into taking a step back and listening to others’ opinions. She says taking that first step to break that first wall between her and her teammates helped her connect with others much better, even outside of work. She also says her communication skills benefited a lot through this experience. Most people in Egypt speak English; however, not all of them are proficient in the language, so she says she had to work past that in a way that everyone could understand her. In this way, Priscilla says she learned how to be more adaptable to work with any situation thrown at her. She learned how to work on her feet to meet deadlines, how to fake an accent so vendors wouldn’t raise prices for her, and how to edit videos since one of her team members had to leave during her time there.

Throughout this entire experience, Priscilla learned so many new things, including how to develop her leadership during the experience and how she could continue to further it after coming back to the United States, including joining AIESEC in Dallas, centered on the University of Texas at Dallas campus, where she currently goes to school. Soon after joining the Dallas local committee, Priscilla decided to run for the local committee president and won as a new member. Thanks to AIESEC and her thirst for adventure, Priscilla was able to do something she never thought she would and is now all the better for it!